Export figures show a sharp rise in exports to Asia, while sendings to Europe are down 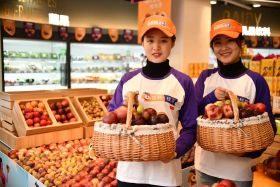 Chilean fruit exports for the 2018/19 campaign are up 2.3 per cent compared to last season according to Asoex.

Between 1 September 2018 and 18 March 2019, the country shipped a total of 1.348m tonnes of fruit. The figures show that a fall in the volume of table grape, cherry and apple exports was offset by an increase in plum and blueberry shipments.

The Asian market showed the strongest growth, with exports climbing 13.14 per cent compared with last season. Shipments to Latin America and the US also rose by around 5 per cent in each case in volume terms.

However, exports to Europe were down on the same period last year.

The US was the biggest market overall, taking 34.4 per cent of shipments, followed by Asia on 28.8 per cent, Latin America on 17.2 per cent, and Europe on 16.4 per cent. The remaining fruit was sent to Canada and the Middle East.