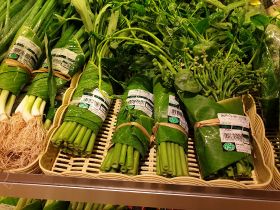 Rimping supermarket in Chiangmai, Thailand has come up with a simple, renewable solution to packaging its fresh produce: wrapping it in banana leaves.

The retailer caused a social media stir after a local real estate company posted photos of the produce packaging to its Facebook page.

Mothership reported the person responsible for the photos, Simon, an employee at Perfect Homes Chiang Mai, was amazed the photos went viral and said they were just photos he took of what looked like a great idea.

The post received some 11,000 shares in the first two days.

Forbes reported the use of banana leaves to wrap and cook food has a long history across the world and that leaves are readily-available in South-East Asia.

Though the movement caused a stir across many other climate zones, the availability and cost of the leaves as an alternative packaging source is likely unviable outside banana-producing tropical regions, according to Forbes.

On some of the products a thin layer of plastic wrap separating the produce from the banana leaf band is visible, which displeased some social media users.