Jazz apples on a roll in Japan 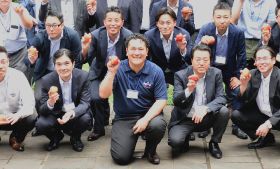 Some of Japan's largest supermarket chains have celebrated the arrival of new-season fresh apples from New Zealand, with demand for premium brand Jazz in particular reported to be increasing steadily.

Representatives from the Japanese retail business were at the New Zealand embassy in Tokyo earlier this week to take part in a special event hosted by leading exporter and Jazz owner T&G Global.

A cross between Braeburn and Royal Gala, the trademarked apple is apparently proving so popular among consumers in Japan that it now has its very own Jazz Apple Anniversary Day on 28 June, which marks the day eight years ago when the first container of New Zealand-grown Jazz arrived in the country.

The product's popularity has grown significantly since then. Nowadays, around 140,000 cartons are shipped from New Zealand to Japan each year, making it the market's leading premium, imported apple.

During the summer months, T&G says, an estimated 90 Jazz apples are eaten in Japan every minute, and that figure is expected to increase steadily in the coming years.

This year, approximately 2,000 supermarkets across Japan's bigger cities will stock Jazz apples, in some cases supporting them with in-store promotions.

This year's point-of-sale materials include free gifts for shoppers, such as traditional Japanese fans, phone grippers, tissues and stickers.