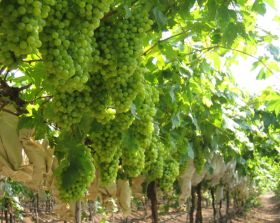 Sahyadri Farmers Producers Company (SFPC), a farmers’ producer company comprising of more than 8,000 marginal fruit and vegetable farmers, exported 22,000 tonnes of grapes during the 2018/19 season, according to local news sources.

SFPC claimed this was equal to 15 per cent of India’s total grape exports for the season, a report from the Financial Express said.

The company, which is 100 per cent owned and run by farmers, also announced it had acquired exclusive production and marketing rights for India for Arra grape varieties.

The rights were awarded by European fresh produce company Jupiter Group after a successful trial. SFPC is now set to establish 40ha of Arra plants by the end of 2019 and will scale by an additional 2023ha by the end of 2023.

Vilas Shinde, chair of SFPC, told Financial Express these crops will include varieties of green, black and red grapes and commercial volumes of production are expected as early as 2020 for export to global markets.

The company also plans to expand its fresh fruit and vegetable retail chain, Sahyadri Farms. It currently has 10 stores open New Mumbai and Nashik, which it plans to increase to 200 in the next two years.

This continues a recent trend of significant growth for SFPC, from 2010, the group of farmers in the company quadrupled to 550 in 2013.

The company also has 6,000 tonnes of cold storage facilities and has the capability to pack 250 tonnes per day in its packhouse system.