Around 25,000 cabbages grown by Naylor Farms in Lincolnshire have been released into Malaysia after DIT helps overcome trade barriers 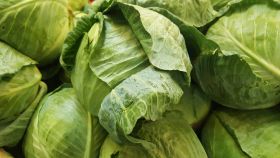