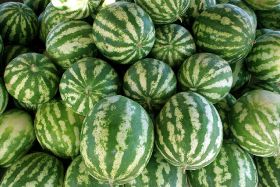 Watermelon and muskmelons are being left to rot in fields across Myanmar, as the country struggles with the impact of coronavirus.

Trade between China and Myanmar, through Muse in northern Shan State – Myanmar’s busiest border crossing - has been hardest hit, with transport restrictions imposed in China to counter the spread of Covid-19 making it difficult for the country to supply the market.

According to Frontier Myanmar, weakened demand has dropped prices. Secretary of the Myanmar fruit, flower and vegetable producer and exporter association, Daw Sandar Myo, said watermelon and muskmelon farmers have been suffering since the eve of the Chinese New Year.

Watermelon and muskmelon deliveries are time sensitive, and without a clear path to the market, many growers are said to be holding back harvest as there’s no certainty of recouping costs.

“The losses from watermelon and muskmelon exports could exceed US$158m,” said Myo.

“These fruits cannot be stored for more than a week. It will not be easy for watermelon and muskmelon farmers who have lost earnings to grow next season. The government will need to help them to recover by lending money,” she added.

U Naing Win, chair of the Myanmar watermelon and muskmelon producers and exporters association, stressed that many growers will need the help to secure agricultural loans to continue.

Frontier Myanmar also reports the downturn in trade at Muse has badly affected logistics companies, including Htay Htay Aung fruit transport business, which has operated for over 15 years.

Owner of Htay Htay Aung, U Soe Win, said he was only able to send one or two trucks of fresh produce per day for over a month, whereas previously he was sending at least 10 trucks daily.