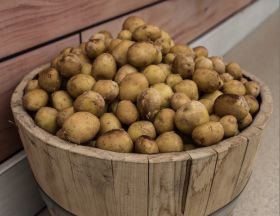 Ayrshire New Potatoes have been included among a group of 14 classic Scottish food lines that could be protected in Japan for the first time as part of a trade deal.

The UK-Japan Comprehensive Economic Partnership Agreement was agreed in principle by international trade secretary Liz Truss and the Japanese foreign minister on 11 September. It is the UK’s first major trade deal outside the EU.
The deal secures additional benefits beyond the EU-Japan trade deal, including a way for Scottish products to be officially recognised. By increasing geographical indications (GIs) from just seven under the terms of the EU-Japan deal to potentially over 70 under the UK-Japan agreement, the government says this would lead to improved recognition of key UK brands in the Japanese market.
Ayrshire New Potatoes, which are also known as Ayrshire Earlies, are joined on the list by such products as Scotch beef and lamb, Scottish wild salmon, Arbroath smokies and Stornoway black pudding.
Truss said: "This is a historic moment for the UK and Japan. This is our first major post-Brexit trade deal and it goes far beyond the existing EU deal by securing new wins for British businesses including in our great manufacturing, food and drink, and tech industries.
"From our Scotch beef and lamb farmers to our Scottish wild salmon and Orkney Scottish island cheddar, this deal will create new opportunities for people throughout the whole of the UK and help level up our country. Strategically, the deal is an important step towards joining the Trans-Pacific Partnership and placing Britain at the centre of a network of modern free-trade agreements with like-minded friends and allies."
Last year Scottish businesses exported goods worth over £500 million to Japan.
Michael Barker
comments powered by Disqus