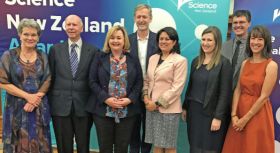 The kiwifruit genome sequencing team received a Team Award for their work in manually annotating the kiwifruit genome. The genome has set the “gold standard” for ongoing genomics and gene identification research.

Dr Russel Lowe, regarded as one of New Zealand’s most successful plant breeders, was recognised with a Lifetime Achievement Award.

"His breeding and selection of new kiwifruit cultivars has transformed the kiwifruit industry. In the 1990s his selection of the cultivar ‘Hort16A’ (marketed as Zespri™ Gold) helped save the industry and in 2010 he recognised Psa disease tolerance in the cultivar ‘Zesy002’ (marketed as Zespri™ SunGold™), which underpinned the rapid recovery of the industry," Plant & Food Research said in a statement.

The latest red cultivar, commercialised as Zespri Red, was also selected by Lowe and has provided the market with a new and distinctive tasting fruit. Lowe is an Honorary Fellow in New Cultivar Kiwifruit Breeding at Plant & Food Research after spending five decades working for the organisation.