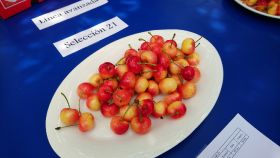 The Chilean cherry industry may one day be able to rely on varieties developed entirely in-country with the progress of the INIA-Biofrutales Cherry Genetic Improvement Programme.

As the 2020/21 cherry season began to enter full swing, Chilean agricultural authorities were shown some of the Programme's more promising varieties.

This included a bi-colour Rainier-type variety (selection 21) with good post-harvest characteristics. It has the potential to be grown as far north as Valparaíso and even Coquimbo, strengthening early cherry production zones and expanding the export offer of this category in China.

The Programme is run by Chile’s Institute of Agricultural Research (INIA) and biotech consortium Biofrutales and is supported by Chilean economic development agency Corfo.

It began work in 2010 and currently has 16 advanced selections all with the potential to become the first cherry varieties developed 100 per cent in Chile with a few more years of testing.

Gamalier Lemus, director of Cherry Genetic Improvement Programme, said the country was closer than ever to producing its own varieties.

"The INIA, together with Biofrutales, is working on this cherry tree genetic improvement project. We are more than halfway to obtaining a new variety and we hope that in the next five years we will have a first Chilean variety of cherries,” said Lemus.

Biofrutales - a biotechnological consortium that includes the Chilean fruit grower’s federation Fedefruta – has played a key role and manager Rodrigo Cruzat said the Programme’s work is crucial as only six varieties represent 90 per cent of Chilean exports.

"With the level of development that the fruit industry, and the cherry industry in particular, has today, it is not possible to wait for genetics or technology developed in another country to adapt to our conditions," Cruzat said.

“We have to take charge of our challenges and among those is genetics, and that this programme is absolutely necessary.”

In regard to selection 21, Cruzat said it would be two or three more years until it would reach the market.

“This potential variety allows planting in regions further north than the traditional ones extending the harvest periods, decompressing the eight to ten week season in central Chile and starting exports earlier,” Valenzuela said.