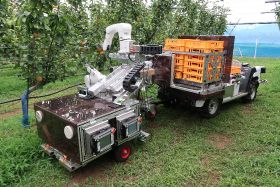 A new artificial intelligence (AI)-powered robot that automatically harvests apples and pears has been developed by a team led by Japan's National Agriculture and Food Research Organization (NARO).

According to a report from The Mainichi, Shinnosuke Kusaba, head of NARO's production distribution research area, said the aim was to commercialise the robot in in two years.

"We would like large-scale farmers and others to use it (the robot) to increase yield as workers in the fruit tree industry are decreasing due to the aging population,” Kusaba said.

The dual-armed robot is mounted on a self-driving car and it can pick a one piece of fruit approximately every 11 seconds, harvesting around 300 pieces of fruit an hour.

Developers have trained the robot using thousands of pictures of fruit and it uses AI and deep learning to identify fruit and detect if it is suitable to pick based on a series of characteristics.

Auto parts manufacturer Denso and Ritsumeikan University were among the other bodies that assisted the NARO with the development of the prototype.

The group said it hopes the robot will be available to rent by 2022 and that the robot and the self-driving car can be purchased by 2025.