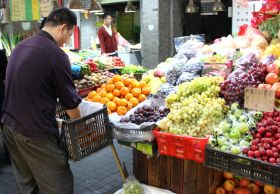 Traditional retail is feeling the effects of group buying in China

Chinese consumers are banding together to purchase products, including fruits and vegetables, through e-commerce platforms, a trend that is disrupting retail traditional channels.

According to a report from the South China Morning Post (SCMP), the trend of group buying is continuing to grow in China and its impact on the market is becoming clearer.

Group buying – where consumers, often whole communities, coordinate their orders to purchase in bulk and receive discounts – is being facilitated by e-commerce platforms such as Didi, Meituan and Pinduoduo.

These groups often purchase directly from suppliers, removing retialers and wholesale markets from the process, particularly in second- and third-tier cities where consumers are more price-sensitive the report said.

“Community group buying supplements traditional e-commerce, which delivers to individual consumers from the same warehouse. It enhances the shopping experience, as retailers are closer to the consumer, and it can save on logistics costs because group leaders are responsible for delivering to individual consumers,” said Yue.  “The platforms are now competing for scale advantage.”

For consumers some of the benefits of group buying, such as price and convenience, are immediately obvious, as one shopper told SCMP.

“I used to purchase fresh produce once a week in a supermarket that was a ten-minute drive away,” said Zhang Xiongwei, a Nanchang resident. “But now I order it everyday on community group buying apps, and I can pick up the order near my home.”

However, the flow-on effects have been just as stark with one Nanchang wholesaler describing the impact on his business.

This has prompted a response from the Chinese government and in December 2020 China’s State Administration for Market Regulation (SAMR) announced restrictions on group buying.

It convened a meeting of six of the country’s top e-commerce players (Alibaba, Tencent, JD.com, Meituan, Pinduoduo and Didi) to address the “low-price dumping” of community group purchases and the resulting consequences.

The meeting emphasised the need to regulate community buying and abide by a set of nine rules designed to protect consumers and businesses and prevent the development of monopolies.

Liu Yue, an analyst at EqualOcean, said the race to service the growing trend forced the government into action.

“The tech giants are burning cash heavily to compete. Some vegetables are now sold at lower than cost, and some small vendors have been pushed out of the market … so the government has stepped in,” Yue told SMCP.