Fake QR codes alert Hansen Orchards to 196 boxes of cherries labelled as Tasmanian grown, worth an estimated A$13,400 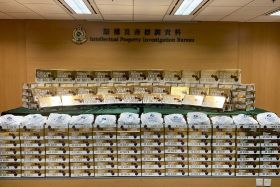 A 41-year-old saleswoman was arrested by Hong Kong customs during a raid on a fruit shop in Yau Ma Tei, in the south of the Kowloon peninsula.

According to the ABC, the suspected counterfeit-branded cherries weighed approximately 400kg and had an estimated market value of HK$80,000 (A$13,400).

Tasmanian producer Howard Hansen said the boxes looked identical to his company's but did not have the unique QR code.

"Counterfeiting of our brand is something that's been going on in advance of 15 years, but now with the traceability and unique identification numbers using QR codes that are on the carton, that's something that they aren't able to replicate," he said.

Hong Kong customs released a statement indicating investigations were ongoing. "Customs is looking into the source of the cherries involved in the case and samples will be sent to the government laboratory for safety testing," the statement read.

"With the Lunar New Year around the corner, customs will continue to step up inspections and enforcement to combat the sale of counterfeit goods and festive counterfeit food items before and during the holiday."

Hansen added that while it’s almost impossible to tell the official boxes from the counterfeit ones apart, there were some features not able to be replicated.

“There's a photo of some cherries on our 43 Degrees South carton and it's got a reflection in the cherry and the counterfeit cartons didn't have the reflection, but we wouldn't have picked it up without the QR code bringing it to our attention in the first place,” Hansen told the ABC.

Every single carton of Hansen’s 43 Degrees South has a unique QR code on it, which end consumers could scan to check the cherries' origin.

"When an individual QR code kept popping up and it was one that wasn't generated by us, that alerted us that there was some fraudulent activity going on, and then our representatives in Hong Kong were able to bring that to the attention of local authorities and take the action that we've seen the result of," he explained.

Hansen said he was pleased the technology is catching counterfeiters. "With the extra identification and traceability on the carton, I think we're going to be able to make prosecutions a lot more regularly if it keeps occurring.”

Chu said he believed a small quantity of the fakes had been circulated in the city before the raid. In Hong Kong, selling or possessing goods with a forged trademark carries a maximum penalty of five years imprisonment and a fine of HK$500,000 (A$84,015).