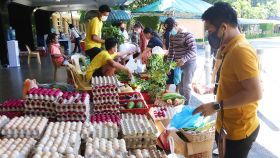 New research from Fitch Solutions Country Risk and Industry Research has suggested Filipino consumers will diversify their diet – including by buying more fruit - as their disposable income grows.

According to a report from the BusinessWorld, Fitch Solutions said the average Filipino household will spend 34.5 per cent of the total household budget on food in 2025, increasing by 4.8 percentage points from 29.8 per cent in 2006.

Fitch Solutions said expected wage growth would drive an increase in the number of Filipino families with disposable income, giving them the means to expand beyond staples such as rice and cereals.

“As a result, there are several instances of shifts in dietary spending stemming from income growth, with consumers spending a lesser proportion of their food spending on staple food items such as rice, instead opting for animal protein,” Fitch Solutions said.

Fresh fruits are one of the foods set to benefit from this and are predicted to make up 5.9 per cent of total food spending in 2025, up from 3.3 per cent in 2006. Bananas are expected to maintain the biggest share of this spending.

“The Philippines has a large domestic banana farming sector, resulting in much cheaper prices, compared to other fruits domestically. As such, bananas are a cheap and widely available source of fruit of Filipino households to meet recommended daily fruit intakes,” Fritch Solutions said.