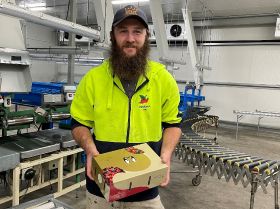 If Australian cherries are to retain their presence at the premium end of Asian markets, then growers must improve the fruit’s quality. That’s the view of 2019 Nuffield Scholar, Jake Newnham.

Newnham, a cherry and apricot grower from Tasmania’s Coal River Valley, travelled to Chile, the US, Canada and New Zealand in an effort to better understand how each country was approaching its cherry production.

“In the past four years Chile has jumped from producing 100,000 tonnes of cherries to more than 300,000 tonnes, while Australia produces about 20,000 tonnes,” outlined Newnham.

“A few years ago, Chilean returns were about A$8p/kg while ours were A$18/kg, but it is critical that we improve quality further if we are to stay at the premium end of the market,” he added.

Australia’s ability to air freight quickly and efficiently to Asian markets is an advantage over the 20-day sea voyage necessary for Chile, but Covid-19 has also restricted flights and forced some local growers to ship product over summer.

“[We must] reduce the number of times a piece of fruit is handled,” he explained. “[It’s important to] introduce cherries to the cold chain as soon as possible, [as well as] extend shelf life through vented boxes that allow forced air cooling.”

Properly trained workers harvesting quickly and efficiently when temperatures are lower helps to reduce potential damage, as does the quick transport of cherries to hydrocoolers that shower the fruit in chilled water and reduce its core temperature.

Newnham and his father installed a forced air (FA) cooler in their packing plant and move fruit around via cooled water flumes, that keep the fruit at around 8 degrees as it travels along the packing line.

In the FA cooling room, the core temperature of the cherries is reduced to 1-2 degrees as air is drawn through specially designed vented boxes, which has to pass biosecurity regulations to be used in transit from Tasmania.

“The traditional boxes we’ve used for cherries don’t allow for air flow, but all the major production areas I visited overseas were using FA cooling through vented containers to improve cherry shelf life. While it might not improve returns directly, the greatest benefit is the ability to hold fruit and target times of higher demand,” said Newnham.

The cherry growers plan to build a second FA cooling room in time for the 2021 harvest and are considering replacing their mechanical grader after Newnham saw the efficiency of optical graders at work in overseas packing lines.

While 2020 was a ‘reasonable’ season and the farm produced 115 tonnes of cherries, Newnham said Covid-19 presented challenges for fruit exports as passenger aircraft were grounded and chartered freight flights became the only option.

“The new cooling option means our cherries could handle a 10-12 day sea voyage but we opted to send larger shipments via chartered flights to Vietnam and they were really pleased with the quality. A big selling point for our fruit overseas is that it’s freshly picked and in the markets in a few days,” he said.

Newnham paid tribute to the Nuffield Scholarship, saying: “I’m super grateful to have been able to see how other cherry growers operate in the real world rather than just learn about the industry through online research and conferences.”

Nuffield Australia awards up to 20 scholarships every year, with applications now open to for 2022.