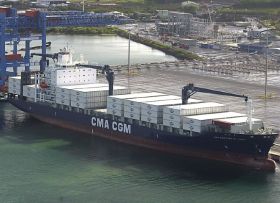 Maersk will become a vessel provider on CMA CGM’s French Asia Line (FAL) service this month, according to Cargonews Asia.

The service has a weekly capacity of almost 40,000 twenty-foot equivalent units (TEUs), and will now employ Maersk’s 9,600 TEU container ship Algol, raising the number of ships on the service to 10.

The consolidation comes after Maersk cut back its own Asia-Europe capacity by about 10 per cent as trade follows the global economy downhill.

For Maersk, the move means extra stops in China at Dalian, Tianjin, Shanghai, Yantian and Hong Kong. For CMA CGM, the move is an unusual one, as the line has 35 new container ships coming online by 2011, 13 of those scheduled to be delivered next year.

In other Maersk news, the company has thrown its hat in the ring for the next round of acquisitions in the shipping world.

The company’s chief executive Eivind Kolding said Maersk had an interest in buying up carrier lines or ships, according to the Journal of Commerce Online, as the fragmented shipping industry amalgamates.

His declaration comes just days after he stated Maersk is likely to lay up ships in the coming year due to slowing trade.