US apple dominance under threat in Taiwan 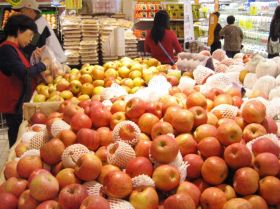 A new report by the United States Department of Agriculture (USDA) has forecast that the US dominance of market share in the Taiwanese apple import industry is under threat, with increased competition from Japan, South Korea, Chile and New Zealand.

Between July 2007 and June 2008, the country imported a total of 134,395 tonnes of apples from overseas to supplement the 6,000 tonnes harvested domestically – almost 100 per cent of which are sold on the fresh market.

The US led the way with 33 per cent of the total imported, followed by Chile (28 per cent), New Zealand (19 per cent) and Japan (18 per cent). However, the USDA said that the US will have to work hard to maintain its lead in the market.

"A continued general preference among Taiwan importers for US apples (best taste, appearance, stable quality) must be tempered by an understanding that Taiwan is a price-sensitive market," the report said. "Improving supplier capabilities worldwide, particularly in the Southern Hemisphere, promises to pressure US suppliers with increasing crop volumes and improved cold storage capabilities."

The pattern change is partly attributed to Taiwan importers spreading risk over a number of different markets in case of an outbreak of pest, such as the codling moth.

Even so, the USDA said, the US is expected to remain the major player in Taiwan for the foreseeable future, maintaining a market share of around 40 per cent.