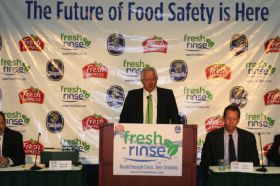 The group has announced that the technology, which has been created following "years of intensive research and investment", will be made available for license to the entire industry as part of Chiquita's commitment to public health and raising food safety standards.

"Based on our extensive research, we view FreshRinse as the biggest invention since the start of pre-packaged salads," said Fernando Aguirre, chairman and CEO of Chiquita. "FreshRinse sets a new standard in food safety for the produce industry.

We continue to deliver breakthrough innovations and we plan to make this new technology available to the industry," he added. "We want consumers and customers to know they have an important new option when making purchase decisions."

Seen as an alternative to the industry's conventional chlorine sanitisers, FreshRinse utilises new acids to create a scientifically validated advancement that delivers a significant reduction in microorganisms, including superior microbial efficiency against pathogens such as Salmonella, Listeria and E. coli, Chiquita noted. A combination of Generally Recognised as Safe (GRAS) and an FDA-approved ingredient, it is acceptable for use on both conventional and organic fresh produce.

During a third-party pathogen study conducted by the National Centre for Food Safety and Technology, FreshRinse was rigorously tested in challenge studies on suspended and attached pathogen cells, and was found to be superior in reducing their presence when compared with chlorine produce washes.

Mike Burness, vice-president for global food safety and quality at Chiquita, reiterated the breakthrough nature of the technology and confirmed that significant research had been conducted to demonstrate its effectiveness in a real-world environment, under processing conditions, and conforming to current industry manufacturing standards.

"The results we've seen have shown that FreshRinse delivers outstanding improvements in food safety for leafy greens," said Mr Burness. "We are also very pleased that, after reviewing the technology, we have had such reinforcing responses from Drs. Osterholm, Acheson and Buchanan – three world-renowned experts in food safety."

Fresh Express, Chiquita's salad subsidiary, debuted FreshRinse at the Produce Marketing Association's Fresh Summit this week, and revealed it is planning to undertake a major consumer education program, including significant television and print advertising and other outreach activities, to inform consumers about the important food safety and quality benefits of FreshRinse.