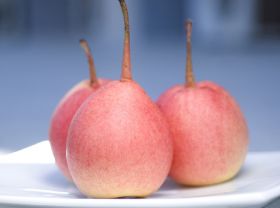 A unique red pear grown exclusively in the southwest Chinese province of Yunnan could be set for its first commercial export shipments this year.

Fresh Yunnan, a 50:50 joint venture formed between local organisation the Red Pear Development Company and New Zealand-based exporter Fresh New Zealand to market the fruit, is reporting a positive outlook for the coming season, which commences in August.

“The weather conditions to date have been generally good, with farmers being able to complete the key tasks of thinning and bagging the fruit on time to a high standard,” said Lew Dagger of Fresh Yunnan. “Considerable support has been given to farmers this year to help them understand the best ways to achieve the quality requirements of export markets.”

The renewed focus on meeting export standards follows a challenging season in 2007, when adverse weather conditions impacted on the crop, forcing Fresh Yunnan to abandon shipments.

“With the better growing conditions and numerous changes that we’ve made to packaging style to protect the fruit this season, we’re optimistic of delivering a product to the market that will receive an enthusiastic response,” Mr Dagger said.

The red pear was discovered more than 20 years ago growing wild in Yunnan’s mountain villages. With its attractive red blush and higher acid and aroma levels than other Asian pear varieties, New Zealand’s HortResearch identified great potential to export the product to Europe and the US. The fruit science company has worked with its Chinese counterparts to commercialise the crop, and Mr Dagger estimates that some 10,000ha of the red pear are now planted in Yunnan, with a sizeable volume of production coming online following the re-working of older pear trees to the red varieties.

Fresh Yunnan hopes to export around 40 containers to South East Asia, the UK and Europe, while domestic demand is expected to be strong, Mr Dagger noted.