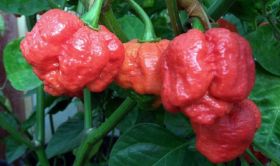 After months of research the Chile Pepper Institute at New Mexico State University has concluded that the Trinidad Moruga Scorpion is the world's hottest pepper.

The spherical fruit recorded a mean heat in excess of 1.2m units on the Scoville scale, with some individual fruits achieving 2m heat units.

In comparison, a sweet or bell pepper, which contains none of the active capsaicin ingredient, has a Scoville rating of zero, and the notorious Scotch bonnet usually scores 100,000-350,000.

With federal grants and interest from parties in the spicy food industry, including seed producers, scientists planted 625 plants of five different varieties, and took random samples from each.

The Trinidad Moruga Scorpion supplants the Bhut Jolokia, which was certified by Guinness World Records as the planet's hottest chilli five years ago.

A California-based chilli seed grower, Jim Duffy, said: "As with all the previous record holders, there will be a run on seeds and plants."

The Trinidad Moruga Scorpion is not currently available commercially, but in 2008 UK retailer Tesco started selling the Dorset Naga, which achieved Scoville scores of around 1.6m units.