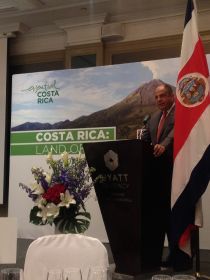 Fresh produce firms were among those at an exclusive trade lunch with the president of Costa Rica Luis Guillermo Solís on his first visit and public address in the UK.

Solís spoke about his vision for business relationships with the UK and Costa Rica, including fresh produce exports. Other speakers included Costa Rica’s minister for trade and finance and former Waitrose managing director Mark Price – now Lord Price in his new role as minister of state for trade and investment.

Chief executive of Costa Rica exports body ProComer, Pedro Beirute, was also at the lunch, which took place yesterday (23 May) in central London. Other guests included representatives from Total Imports, Jem Fruits and Keelings International, UKTI and other food and drinks businesses.

President Solís spoke about the UK and Costa Rica’s historic trading relationship, and said his visit was designed to showcase his vision and the business opportunities available. “We are unique in that we have no mineral resources or fossil fuels – what we have achieved has come from commitment to education. This means Costa Rica has an ample talented and skilled workforce.

“We also attract the highest amount of foreign investment in Latin America,” he added.

Speaking about Costa Rica’s commitment to environmental protection, Solís said the country is the third-greenest country in the world behind Norway and Sweden.

Costa Rica currently has 14 Free Trade Agreements (FTAs), he continued, with markets including the EU, North America, China and Singapore.

“My final message is that Costa Rica has a government that is committed to public-private partnerships,” he said.

Price said UK imports of Costa Rican produce totalled £155 million in 2015, topped by bananas, pineapples and melons. “I want the UK’s trade and finance relations with Costa Rica to be as strong as possible,” he said.

“Diversification in fresh produce is in line with our export model in other categories – none of our products contribute more than seven per cent of exports. We have a very diverse and volcanic geography that has two oceans and various microclimates, which means we can produce a range of fruit and vegetables,” he said, adding that melon exports is one of the fastest-growing exports.