New Zealand is set for a record 584,000-tonne crop of apples and pears 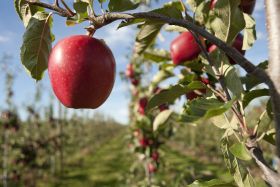 New Zealand is tipped to set a new record for its apple and pear crop this season with the industry looking at a forecast 584,000 tonnes.

“The days of boom and bust cycles are over; year on year we prove that New Zealand is the best country in the world to grow and market apples,” said Alan Pollard, CEO of industry body Pipfruit NZ.

“This is a phenomenal time for New Zealand’s apple and pear industry. 2017 is shaping up to be a season to celebrate and we continue to strive for even greater success,” Pollard said. “It’s a result of huge investment in the industry and reflects the optimism of the industry.”

Germany remains the largest export market for New Zealand, but Pollard told Fruitnet that there’s been a definite shift from “West to East”.

“In 2004, Europe and North America took in more than 80 per cent of our crop; now, its about 50:50 with Asia,” he explained. “The opportunities in Asia come from a growing GDP, rising middle class incomes, and consumers who are very concerned about safe fresh produce, so it was a natural move for New Zealand to export there.”

In 2012, the New Zealand government set a goal of doubling exports by 2025. In a four-year period, the apple industry has doubled the value of its exports to NZ$720m, and Pollard says they’re on track to quadruples this by 2025.

“It’s no surprise though as over the years, the industry has invested and developed exclusive proprietary varieties that are world-class and that consumers want,” Pollard explained.

Royal Gala accounts for around one-third of New Zealand’ apple exports, with higher-colour strands coming into production. Yet it’s New Zealand’s proprietary breeding programmes and exclusive marketing that give the industry a competitive edge

Club varieties Jazz and Envy are growing quickly, as are the Pacific series, while recently announced new red-skinned apple Dazzle is looking promising, as are some varieties of pears, Pollard said.

“Pears are a small part of the industry, but the [Prevar-bred] pear, Piqa Boo, is viewed as revolutionary for the industry. It will be transformational and we may see greater variety dedication to Piqa Boo.”

With a record crop of apples, challenges for the industry include access to labour, particularly skilled labour, and a potential shortage of pickers and bins. The other major challenge will be increased pressure on packhouses and cold storage, with some of the larger vertically integrated companies investing in new, modernised packhouses and sorting machinery.