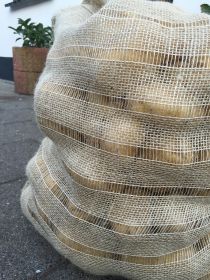 Packaging supplier LC Packaging has developed a hessian sack with extra ventilation to prevent seed potatoes from sweating and rotting during transit.

The patented LC Vento jute bag, which was developed by the packaging supplier in-house, has looser stitching and ‘ventilated striping’, allowing palletised potatoes to respire more and sweat less when exported.

The new packaging could prove particularly useful to Scottish seed potato suppliers, which export the majority of their product, particularly to Egypt, Spain, the Netherlands and Morocco. In 2015/16 alone, Egypt imported almost 50,000 tonnes of Scottish seed, according to the AHDB.

“A serious issue when exporting quality products such as potatoes, onions and carrots, is the so called ‘temperature shock’,” explained communications manager Lotte Mastwijk.

“The temperature difference between the mode of transport (chilled) and the ambient temperature at the destination location makes the products sweat profusely.

“While still in the standard packaging, these products cannot dissipate the exuded humidity and moisture. This can lead to the development of moist and the start of the products’ rotting process.”

She added that the bag reduces the chance of mould, “minimising the risk of product quality claims."

Although yet to be widely adopted, the new sack has already been trialled by one Dutch company, which has continued to use it, according to the company’s Scotland country manager Katie Brown.

She confirmed that the new bag would cost more than a standard hessian sack because of the more time-consuming and complicated stitching required.

“Clearly there are additional costs involved, but the benefit is that the (potato) seed’s of a better quality when it gets to the end user,” Brown said. “You can have the best quality seed coming out of Scotland, but it’s no use if it deteriorates along the way.”