Theresa May set to pledge £44.5m to tighten up border security between UK and France as Macron visits UK to strengthen Calais border treaty 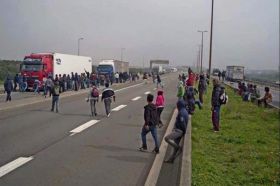 An extra £44.5m will be spent on bolstering border security at the Channel and prevent migrants crossing from France, the UK government is set to announce.

The money will be invested in fencing, CCTV and infrared detection technology in Calais and at other border crossings, the BBC reported.

The announcement is expected to be made by Theresa May at a summit with French President Emmanuel Macron on 18 January where Macron will sign a treaty strengthening the Le Touquet accord.

The agreement was first signed in 2003, moving the British border to France. It means undocumented migrants prevented from entering the UK remain in France - many in makeshift camps in Calais and Dunkirk.

The summit marks a shift from Macron’s 2017 election campaign, during which he said he wanted to renegotiate or scrap the Le Touquet accord, according to the BBC.

The summit will be used by the British and French leaders to reaffirm their commitment to working together on defence and security, despite Brexit.

The leaders are expected to announce that the UK will deploy three RAF helicopters in Mali, to support French forces fighting Islamist militants, and that France will send more troops to support British forces in Estonia on Nato's border with Russia, the BBC reported.