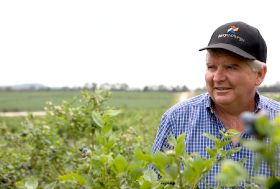 Peter McPherson, general manager of Costa’s international business, accepted the award on behalf of Costa and told the assembled audience of local and international dignitaries that it was a great honour to be recognised with such a prestigious accolade.

“The footprint Costa has established in China working together with Driscoll’s has taken a lot of hard work,” said McPherson. “Most importantly this has involved a commitment to work cooperatively and harmoniously with local stakeholders, including government officials, our employees and local villagers.”

The award recognised the agronomic practices Costa has brought to China, including its world-leading blueberry intellectual property and substrate growing methods, according to a media statement from Costa. Such ground-breaking moves have not only been a game changer for the way berries are grown in China, but also for the way agriculture is conducted in general, the group noted.

“Importantly, the award is also a recognition of how Costa has worked with all local stakeholders in helping to realise their commitment to agricultural policies and practices that improve economic development by creating jobs in agriculture, have a positive environmental impact and benefit the greater social good,” said McPherson.

Costa’s investment in China is one of the largest made by a foreign-owned company in Chinese agriculture in recent years, according to the media statement. Key factors underpinning the investment include: introducing world leading high-tech growing and management systems; recognition of key national agricultural policies focusing on sustainable production; improvement in the economic and social well-being of the local population; strong and harmonious working relationships with local authorities; and implementation of safe and healthy work practices.

Earlier this week, McPherson also spoke on the horticultural potential of Yunnan Province, and Costa’s investments in this region of southwest China, at Fresh Produce Forum China, China’s leading fresh produce conference event, which took place at the inaugural edition of China Fruit Logistica in Shanghai on 14-16 May.

The AustCham Westpac Australia-China Business Awards recognise the success of Australian and Chinese businesses in China across a broad spectrum, from small entrepreneurs to large publicly listed companies. Besides agriculture, food and beverage, the awards are given in a range of other sectors including: business innovation and the digital economy; construction and infrastructure; consumer services; cross-border investment; professional and business services; and sustainability, diversity and social responsibility.

The awards evening formed part of the Australia-China business week, which concludes with an Australian Rules (AFL) football match to be played in Shanghai between Port Adelaide and Gold Coast Suns on Saturday (19 May). The match at Jiangwan Stadium will be attended by Australian Trade and Tourism Minister Steve Ciobo.