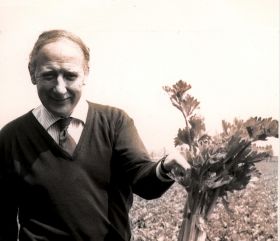 Guy Shropshire, the founder of leading salad vegetable supplier G’s Group and one of Britain’s agricultural pioneers, has died just short of his 93rd birthday.

Shropshire embraced farming innovation throughout his career to create one of Britain’s best-known and most successful multinational suppliers, with operations expanding from Britain to Spain, the US and Czech Republic, reaching nearly £450 million in turnover last year.

Born in 1925, Shropshire’s father ran a farming and butchery business. The youngest of four sons, Guy Shropshire began rearing poultry and selling eggs while at school, and by the age of 18 was managing a 70-acre farm growing root crops and salad vegetables, all the while studying agricultural science at Harper Adams University.

In 1949 he married Joan Ollivant, with whom he had four children, Elizabeth, Peter, Annabel and John, who is now chairman of G’s Group. Ollivant tragically died in 1962.

Shropshire’s vision for farming so impressed an early bank lender that he was able to purchase his first site in the Cambridgeshire Fens in 1952, the 330-acre Fordey Farm, near Ely. Within three years he had redeemed the debt. Over the decades Shropshire added other farms to the estate, with celery becoming his major crop.

His purchase of Hainey Farm introduced to Britain the G’s brand (short for Guy’s). Foreseeing the growing domination of the supermarkets, by 1957 he was no longer selling earth-covered celery in traditional bushel boxes to wholesalers, but had risked investing in a purpose-built packhouse. It paid off, with Marks & Spencer commissioning him to directly supply his freshly washed celery in their own packaging, in 1961.

By 1984 Shropshire had spread production beyond the UK to Spain to help meet new supermarket models of year-round fresh produce supply. G’s Spanish business is now as large as its UK counterpart, supplying retailers throughout Europe.

Throughout his career, Shropshire continually introduced farming innovations, including a patented strawplanter to protect soils, laser levelling fields, introducing new salad varieties such as Iceberg and Little Gem, as well as inventing mobile packing rigs to cut, clean and pack celery and lettuce in the field, reducing waste and keeping freshness.

Always a generous supporter of the local community and various charities, in Shropshire's later years he also enjoyed breeding racehorses, playing snooker and watching Norwich City. His greatest satisfaction and pride, however, came from seeing that the next generations of his family shared his passion for the farming business and are committed to carrying on his legacy.

Wholesalers French Garden Bristol recognised Shropshire’s legacy following his passing, writing on social media: “We are saddened to hear the news that Guy Shropshire, a legend within the industry passed away yesterday. Our thoughts go out to his family.”