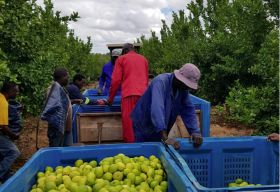 The citrus season is getting underway at Jupiter Group’s new South African production sites as the supplier takes measures to improve fruit quality.

Three weeks into the citrus season, Jupiter South Africa is packing lemons for export and Navel oranges for the local market.

As the supplier moves through April, it will begin to pack its Star Ruby grapefruit much later than it did in previous years as a trader, having decided to minimize the "aggressive" process of de-greening, which relies on high temperatures, humidity and ethylene gas.

Meanwhile, the company’s farm in the Western Cape, Zonquasdrift, which it bought from South African company Bonaire last year, has started picking satsumas this week.

However, it will be the last time that fruit from the company’s recently-acquired farm in Limpopo, Maswiri, will be packed in the 40-year-old packhouse, affectionately known as the “old lady”, as work begins to upgrade the facilities.

May will see the arrival of Jupiter’s brand new Greefa electronic sizer and MED pack line components, which will be used to pack Valencia oranges. Packing using the new lines will start as early as June.

Technical director Cristian Mertzger said: “By the end of the year, the entirety of the old packhouse will be gone and we will be in a better position to meet the demand of our markets' specifications.

“It will be great for the team to welcome CEO Mark and his wife Yvonne, a director, to Maswiri to officially inaugurate the new packing line in June.”

Looking to improve operations further, the farm is about to take receipt of 10 new John Deere tractors and 10 new spray machines which it says are “much more efficient”.