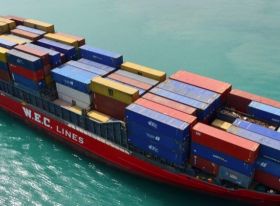 Dutch shipping company WEC Lines is beginning a new service connecting the Port of Liverpool with two major Portuguese ports and a new link with Spain.

The new weekly service will begin in April and connect Liverpool with Setubal (just south of Lisbon) and Leixoes (just north of Porto), using the 882 TEU vessel MV Francop.

The direct routes to Liverpool will be used to import a range of Iberian products, including fresh produce.

Mark Whitworth, chief executive of Peel Ports, said: “Confidence is building around Liverpool in part thanks to the recent series of high-profile line announcements we have already made this year.

“Shipping lines and customers are coming round to benefits of shipping through one of the UK’s natural trade gateways which is ultimately closer to the end destination of their cargoes.

“As Liverpool goes from strength to strength we expect major lines to build on their investments at the port in the comings years.”

Bryn Kerr of JSA Global, WEC Lines’ UK agent, added: “This is a very positive signal for the Port of Liverpool and speaks volumes of the relationship which has been built up over the previous years with WEC Lines.

“The new service will ensure goods are able to arrive closer to their ultimate destination and in the quickest time possible.”

WEC Lines becomes the fourth major line announcement for Liverpool in the last few months, following the commitment by Chinese shipping giant COSCO (China Ocean Shipping Company), and the 2M Alliance which confirmed at the end of 2018 that Liverpool will be a permanent call on its TA4 transatlantic service.

There are now five of the world’s biggest shipping lines using Liverpool as a global gateway to the north of the UK and the midlands.

Earlier this year Peel Ports, which owns the Port of Liverpool, announced it was aiming to create 250 jobs, mostly in Liverpool, to deal with continued business growth.

Nico Pons, commercial manager of short sea services at WEC, said: “We’re delighted to commit to using Liverpool with this new direct call. In the three years we have been using the port we have been greatly impressed by the care and efficiency demonstrated by Peel Ports and look forward to having direct access to the north of the UK and the midlands.”