Avocado producer awards over £1,000 to Scout group for its good work with young people in eastern province of Mpumalanga 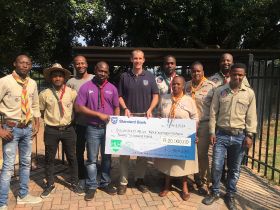 South Africa-based avocado producer and marketer Halls has donated over £1,000 to the Scouts in the country’s Mpumalanga province where it is based.

A cheque for R20,000 was handed over to the organisation as part of Halls’ Lula Sandla awards initiative to support organisations making a positive contribution to their communities.

Having been nominated by Craig Lewis, Halls’ commercial director of Halls South Africa, the Scouts group was presented with the award on 15 April at a small ceremony in Mataffin, Nelspruit, not far from Halls’ South African head office.

“I am proud to be associated with the Scouts organisation, specifically in Mataffin,” said Lewis as he handed over the award. “Thank you for everything you are doing for the youth under Scouts. It is an incredible organisation that equips young people with life skills.”

Lucy Magagula, regional commissioner of Scouts Mpumalanga thanked the company for the award, saying: “This means so much to us and it will make a huge difference to the organisation because most of the kids who are Scouts come from disadvantaged areas. With this award we will be able to buy all needed equipment for the kids when they go on camp so they can advance their learning”.

The ceremony ended with the Scouts acknowledging Lewis for his support by awarding him an SA Mpumalanga regional badge.