Distracted shoppers ‘spend 41 per cent more on the phone’ 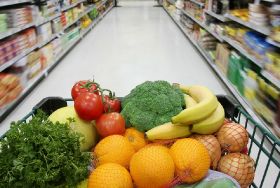 New research has shown that shoppers spend on average 41 per cent more at the supermarket if they are on the phone while shopping.

An analysis by Bath University of two Swedish studies found that distracted shoppers using their mobile phones took longer to walk round stores and added more items to their baskets.

Each second spent on the phone or social media added an extra 20 to 40p to their receipt at the till.

In one study shoppers put 45 per cent more items in their basket while on the phone, while those in a second study added 58 per cent more.

Using eye tracker technology, the research team from Stockholm School of Economics, Babson College and the University of Tennessee studied how people moved about the store, what they looked at, and what they bought.

The researchers say using a mobile distracts people from their planned shopping list, whether that’s an actual itemised list or their autopilot shop  when people take a routine path through the supermarket picking up favourite items.

More items end up in the trolley because exposure to a greater array of products jogs people’s memory about other things they have run out of at home, or because coming across and noticing new products inspires people to make extra purchases.

Dr Carl-Philip Ahlbom, prize fellow at Bath’s School of Management, said: “Retailers have tended to worry that when shoppers use their mobiles it’s distracting them from spending money, so we were amazed to find completely the reverse effect.

“The findings were very clear: the more time you spend on your phone, the more money you’ll part with. So if you’re trying to budget, leave your phone in your pocket. It’s not the phone itself that causes more purchases, but its impact on our focus.

“On the plus side, it isn’t necessarily a bad thing for shoppers. Taking a slower and more scenic journey can remind you of products you’d forgotten you needed, and it can introduce you to items that might make for a more inspiring menu.

“Shoppers are very habitual creatures, most of us vary our purchases by less than 150 items a year, so maybe you can thank your mobile for freshening things up.”