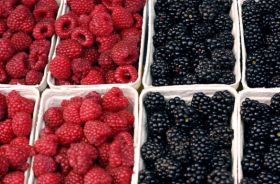 Exports from Britain to international markets rose by 70 per cent, with strawberries, raspberries and blackberries emerging as our most popular products in the category.

Together, those three fruits racked up £18m in overseas sales, and the Netherlands (£6m), Spain (£5.8m) and the Republic of Ireland (£3.4m) emerged as the UK’s biggest markets for berries.

In 2018, British soft fruit was sold in 34 international markets, with 12 new countries opening their doors to British product.

Over the past five years, the demand for British berries has risen consistently, Defra reported, with the total value of exports rising by £16.8 million – an increase of more than 300 per cent since 2013.

Speaking at the Fruit Focus Show in Kent on 17 July, farming minister Robert Goodwill said: “For soft fruits, the proof is in the pudding, with exports having risen dramatically in the last year. This clearly shows the global demand for delicious, British-grown produce.”

At the event, Goodwill outlined how the UK horticulture sector can continue to grow and meet the demands of consumers, with Defra saying the stats reveal "the untapped opportunities for farmers and food producers as the UK leaves the EU".

The government’s Food is Great campaign works with industry leaders to boost the profile of UK food and drink at home and abroad, helping businesses to capitalise on new export opportunities.

Fruitnet's annual Global Berry Congress, which attracted 580 people from 50 countries in 2019, returns to Rotterdam on 30 March-1 April 2020. Visit the official website for details.