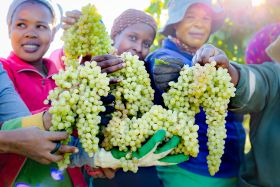 The South African raisin industry is targeting UK trade through a new promotional campaign following a study of the UK dried-fruit market.

The research, carried out by Promar International, underlined the opportunity for Raisins South Africa - a non-profit company representing 1,000 farms in the Northern and Western Cape - to communicate their USPs to key industry players in the UK.

The industry recently celebrated 100 years since the first crop was produced in the Orange River region, where over 90 per cent of all South African raisins are grown. This area experiences exceptional levels of sunshine - on average 10.5 hours every day between January and March - which is when the fruit is harvested and naturally sundried.

The hot, dry, sunny climate, along with the ample supply of water from the river, makes ideal growing conditions to produce the highest-quality fruit, according to Raisins South Africa.

The naturally sun-dried grapes are available in many varieties, including Thompson, Flame and the Jumbo Golden. South Africa is the only country in the world to commercially produce Jumbo Golden raisins.

The UK is the largest import market in the world for dried fruit, with around 106,000 tonnes being imported annually. South Africa has a modest share of this with exports to the UK of just 4,000 tonnes.

Raisins South Africa wants to increase sales in the UK and believes the integrated marketing and PR campaign will be the catalyst to achieve this.

2020 activities will concentrate on upmarket retailers and the confectionery, convenience and snacking sectors. They include trade PR, online and print advertising, a trade trip to the Orange River production area in early March, and a video brochure delivery to key industry players and the trade media.

Ferdie Botha, chief executive of Raisins South Africa, said: “The UK is a traditional market for South African fresh produce and we believe that our current market share is significantly less than it should be. Along with keeping the market updated with industry developments, we will also work to emphasise the benefits of our exceptionally high quality raisins.”