Australian plums to be globally commercialised by AIGN

Sweetah, Vitaplum and Queen Garnet will be commercialised outside of Australia by The Associated International Group of Nurseries 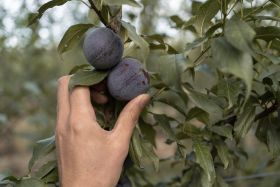 The Associated International Group of Nurseries (AIGN) has announced it will manage global commercialisation of three, new Australian-bred plums.

Gavin Porter, chief executive of AIGN and the Australian Nurserymen’s Fruit Improvement Company (ANFIC) shared the news regarding the agreements for the Sweetah, Vitaplum and Queen Garnet plum varieties at the AIGN annual meeting.

The three varieties have already been commercialised in Australia and Porter said each plum is represented by a different variety owner, which added to the complexity of the negotiation process. AIGN will now provide global management services and global marketing services for the variety owners.

“These varieties will infuse some excitement into a mature plum category,” said Porter.

Initially marketed in Australia as the Sweetah plum by owner RPA Superfoods, AJOP20, is a rosy, heart-shaped early-season plum.

Queen Garnet, is a mid-season plum managed by global master licensee, Nutrafruit, which has already worked to build the variety’s brand with effort including a trademarked tagline ‘QG – The Antioxidant Plum’.

The final variety is, GW1, a late-season plum marketed in Australia under the Vitaplum name by Vitaplum Technology.

AIGN said in a release it is formulating a global, synchronised marketing plan to extend the exposure of these plum varieties to the consumer by capitalising on the complementary ripening schedule of the three selections (early, mid and late season).

It said coordinated progressive harvests controlled by latitude and altitude will allow for an extended season presence at the store.

AIGN’s consumer campaign is set to focus on educating shoppers about the high-health benefits of plums, and their eating experience.