Eating more fruit and veg is good for health and the environment, but which products bring the greatest benefits? 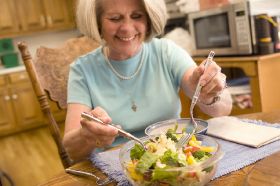 “People’s tastes are changing – they are moving more towards fruit and away from vegetables, and also eating more tropical fruits and less home-grown fruit. This is not good for climate change.”
Green pointed out that around one-third of all the fruit and vegetables consumed in the UK now come from countries vulnerable to climate change and half comes from countries where water scarcity is an issue.