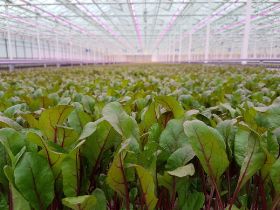 Data captured over an eight-week period showed 95 per cent of CEA growers have an optimistic outlook for the next 12 months with all types of operations including greenhouses, shipping containers, tunnel and vertical farms showing profitability.

“The optimism reflects what we have seen across many areas of the industry including increased technology adoption and increased consumer expenditure on fresh produce. And despite the challenges we’re seeing an overwhelming number of new entrants into the market,” said Keiller.

“What has not changed is the high percentage of new growers, almost 50 per cent, that have no experience in agriculture before starting their business. That lack of experience has an impact on new technology solutions created and the need for more education to be available to support them. It also shows a real desire to make a difference considering their willingness to start during a pandemic.”

Respondents from 58 countries shared their views on their farming practices, financials, and the impact of COVID-19. The report also gave insight on three key growth regions around the world – India, the UK and MENA (Middle East and North Africa).

"The results of the 2020 Census confirmed our hypothesis that the UK, India, and MENA regions are the emerging hotspots for CEA, albeit for different reasons. In the UK, Brexit is driving investment towards CEA to combat supply chain risks, while in India rising population and increased premium consumer demand for clean food are driving CEA. In the MENA region, government responses to Covid-19 have accelerated policies and incentives for developing scalable CEA solutions,” said Gordon-Smith.

“All of these regions present great opportunities for the CEA industry to grow and make a meaningful impact on their respective local conditions.”