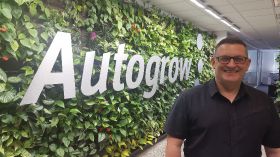 Autogrow has announced a corporate reorganisation, which will see the company split into two separate entities with the launch of digital farming venture WayBeyond.

WayBeyond will be led by Autogrow chief executive and founder Darryn Keiller. It will focus on the global expansion of digital farm solutions for large scale, multi-site farms to optimise farming productivity.

Autogrow, now under the management of acting general manager Rod Britton, will focus on continuing the global growth of the automation and control business for small to medium growers.

“It’s a fantastic opportunity and one I’m proud to have brought to fruition - the growth of an existing business in Autogrow and the creation of a new and transformational one in WayBeyond,” explained Keiller.

“A journey like this is a team sport, with a highly talented team, committed investors, and government and industry collaborators; the dream has become a reality.”

Autogrow has a portfolio of existing automation products namely the Intelli Range and the MultiGrow while WayBeyond brings the results of three years of research and development with solutions launched in 2020 - FarmRoad (a crop management platform), and the Folium wireless smart sensor network. The first service launched utilising the FarmRoad platform was an artificial intelibence (AI)-based yield prediction service.

“With two distinct product offerings and two vastly different customer bases; we are now in the position to separate and allow both companies the opportunity for further growth,” said Keiller.

“One of our early commitments to transforming the industry, is that everything we develop will be open, interoperable, and truly agnostic. Working with anyone in the industry’s large ecosystem, whether they be an ally or competitor, a software, services or hardware provider; the launch of WayBeyond makes that promise a reality.”

The move will see a core team of employees continuing with Autogrow while the larger base of employees hired to create FarmRoad and Folium will be in WayBeyond. As both businesses meet growth targets, they will look to recruit new team members, building an even stronger base for support and growth.

“I am incredibly excited about the future for both businesses. My focus will be on creating shareholder value for the growth of WayBeyond, including enterprise customers we acquired across the US, Europe, the UK, and Australia in 2020. Today WayBeyond sits inside horticulture but the potential for some of our applications and the intelligence of our systems will extend themselves beyond agriculture, with potential for other industry sectors,” said Keiller.

“The vision of WayBeyond is to transform the agricultural industry to produce food sustainably for everyone on the planet. It is a big challenge but worthwhile and will include aligning with the United National sustainability development goals; ensuring our solutions consider the impact on food, the environment and people.”

Both Autogrow and WayBeyond are privately held companies with changes in trading taking effect from 1 February 2021.