Fresh fruit sales across South-East Asia down during important period, as concerns regarding counterfeit products remain 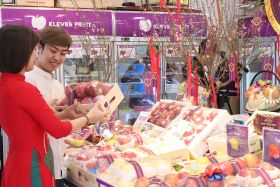 An outbreak of the highly contagious UK variant of Covid-19 in Vietnam’s Hai Duong province on 28 January decimated fresh fruit sales on the eve of Tet (Lunar New Year), according to leading market sources.

The response from the Vietnamese government was fast, but the damage had already been done. A further 483 new cases have been confirmed in more than 10 Vietnamese provinces and cities, including Hanoi and Ho Chi Minh, since the first case was reported.

Nguyen Xuan Hai, chairman of importer and retailer, Klever Fruit, said plans for Tet celebrations have been devastated as a result.

“The outbreak has completely changed the whole picture of the market,” explained Nguyen. “The fresh fruit demand for the whole market is believed to have reduced by 30 per cent, and up to 50 per cent in some cases.

“In general, over the last 10 days (1-11 February 2021), the prices of imported fresh fruit of all kinds have dropped dramatically, especially Chilean cherries.”

New Zealand cherries appear to have been hit the hardest, according to Nguyen. “This is a very hard year for New Zealand cherries. Excessive rainfall over a longer period just before harvest saw yields drop from 30 per cent to 60 per cent, and prices for the remaining cherries increased by up to 30 to 40 per cent above the annual export prices,” he explained.

“Cherries from New Zealand are considered to be the best quality, with large fruit sizes that are firm and juicy. The Vietnamese market believes New Zealand cherries are premium cherries that have superior qualities to fruit from Australia and Chile, and as such, are usually double the price of Australian premium cherries.”

Speaking of Chilean cherries, 2021 marks the arrival of the fruit in Vietnam, after Chile gained market access in October 2020. Backed by an ambitious marketing campaign, Nguyen said the quality of the fruit has varied so far.

“Although the real quality upon arrival is only average because the fruit is soft and sometimes have yellow stems, the Chilean cherries have a relatively cheaper price, and so big volumes have been sold.”

The lower price has seen an increase in counterfeit products, according to Nguyen.

“On the market, many stores have printed fake boxes of New Zealand cherries and Tasmanian cherries, and they replace the fruit with Chilean cherries in order to trick consumers, so they can sell it at twice the price,” he explained.

Meanwhile, Nguyen is expecting a strong season for Australian grapes in Vietnam this year, highlighting quality as a key selling point.

“This year we’ve got a number of varieties expected to meet consumer expectations, such as Sweet Sapphire, Autumncrisp, Ivory, Sweet Globe, and Midnight Beauty.

“However, maybe due to the timing of the season, Australian grapes will arrive in Vietnam late for Tet celebrations, so it might miss the opportunity to sell good quantities at high prices.

“South African grapes have the same season as Australian grapes, however, the quality and price are always lower in comparison,” said Nguyen.

In Thailand, managing director for importer and retailer Vachamon Food, Wipavee Watcharakorn, remarked that sales have been low during the Lunar New Year celebrations.

“The shortage of Peruvian grapes, and the low quality of Chinese Red Globe grapes, has seen supply fall well short of what is expected at this time of year,” explained Watcharakorn.

“Australia Ralli seedless berries have been mixed, with fruit sizes varying, which means it has not reached the premium status in comparison with the high price at the beginning of the season.”

Watcharakorn added that a new variety of Chinese-grown citrus, Wo Tangerine, has performed strongly, and is set to replace the Murcott in years to come.

“Overall, sales are not high as Covid-19 has impacted our economy, and consumers have a much smaller budget this year,” she noted.

In Malaysia, a second lockdown due to an increase in Covid-19 cases has impacted sales considerably.

“Import volume has also decreased substantially and therefore there is no oversupply in the market as all importers have been relatively cautious due to the foreseeable slowdown in sales,” explained Koay.

“Interestingly, during the second lockdown there has been no panic buying like the first lockdown from March – June 2020.

“Citrus and bananas were both in high demand then, but this time the demand is just fair,” concluded Koay.

The aforementioned Covid-19 resurgence in Thailand has resulted in retailers shifting demand towards imported fruit with a longer shelf life, according to a recent ASEAN update issued by Austrade.

The move has been made to "minimise cost and potential wastage" and will reportedly impact Australian stonefruit demand.

"Protocols do not permit mixed shipments, and full container orders are too large for buyers," read the update.

"Low uptake this season may impact future demand, given the importance of sustained market presence and education to build consumer awareness."