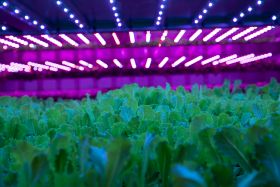 Scottish agritech firm Intelligent Growth Solutions (IGS) is introducing its indoor growing systems to the UAE as the country searches for sustainable supply channels due to population growth and a lack of water.

IGS has signed a deal with Abu Dhabi-based Madar Farms, which specialises in agritech R&D and vertical production. The Emirati company has already developed a range of premium indoor-grown crops to supply the domestic retail market and this agreement will allow it to scale its operations.

IGS CEO David Farquhar said: “In the UAE and wider Gulf Cooperation Council (GCC) region, there has never been a more pressing need to identify and develop sustainable food supply chains, securing local resources and reducing the reliance on imports.”

Madar Farms Founder and CEO Abdulaziz AlMulla added: “As the population in the UAE continues to grow and there’s more focus on sustainability, the new IGS system will help to meet this increasing demand and give UAE consumers more options to enjoy the best quality fresh locally-grown produce.”

With five growth towers initially planned, each standing six metres tall, the total growing area will be up to 1,500m2, allowing Madar Farms to produce as much as 30 tonnes of crop a year.

The company said it chose the IGS plug-and-play vertical farming platform to enhance the quality and quantity of produce it can supply to businesses and leading retailers across the region.

Initially, commercially sold produce will include a range of premium leafy greens and herbs, with other crops added "in the near future".

The partnership will also allow for more R&D, particularly in the propagation of tomato seedlings, which is a significant focus in region.

Madar Farms will use the IGS system to enhance early-stage seedling production, with the seedlings then moved into an indoor growing environment to complete the full growth cycle.

“This would ensure predictable growth of high-quality tomato plants with the greatest level of consistency and flavour, without using any pesticides,” said an IGS spokesperson.

“As the IGS system continually recycles water, it will also minimise water usage. IGS has recently partnered with experienced growers to undertake similar trials in its growing environments of strawberries and seed potatoes, with excellent results.”

The installation of the system for Madar Farms is due to begin later this year and the growth towers should be operational in November 2021.