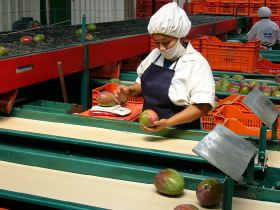 Peruvian mango exporters are scaling back their supply programmes significantly due to an estimated 50 per cent fall in production following an unusually mild winter, according to the country’s mango exporters’ association (APEM).

“The temperature variation during the winter months was much smaller than usual – that is to say that average minimum temperatures were 1.5oC higher and average maximum temperatures 1oC lower than normal,” APEM manager Juan Carlos Rivera told Fruitnet.com.

“The result was poor flowering that has led to a significant fall in production. Although the quality of this year’s crop is very good, we expect output to be as much as 50 per cent down on 2007/08, when it reached approximately 300,000 tonnes.”

Peru has diversified its export markets over the last few seasons in an effort to reduce dependence on the US – which as recently as 2002/03 accounted for two-thirds of exports.

Although the US and Europe remain the biggest destinations, absorbing around 43 per cent and 53 per cent of the export total respectively last year, Peru now increasingly exports mangoes to China, eastern Europe, New Zealand and Chile, among other countries.