Florette challenges public to create their One Minute Wonders 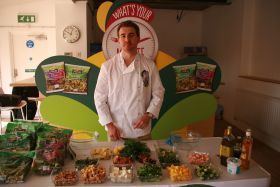 Florette has launched the latest weapon in its assault on the hearts of the British salad shopper – the One Minute Wonder campaign.

The new marketing push is aimed at driving frequency of purchase by inspiring shoppers to be more creative with their meals, with consumers labelled as ‘adorers’ and ‘acceptors’ the focus of the campaign.

Florette is challenging these shopper groups, which it says make up some 40 per cent of all consumers, to create quick recipes via an on-pack competition. The best entries will progress to regional finals, with an overall winner being featured in the summer TV ad.

The bagged-salad leader expects to achieve some four million digital impacts and reach ABC1 target consumers with three new TV executions running through July and August, when the One Minute Wonder campaign takes over from Bags of Feelgood. Slots have been booked alongside foodie shows such as Come Dine With Me, Nigella and Sunday Brunch.

The initiative is linked to a Facebook page where consumers will be able to share recipe ideas.

“It is a natural extension of our Bags of Feelgood platform which successfully delivered strong consumer appeal in 2012 by reinforcing all the positive reasons why consumers eat salad, rather than solely focusing on diet. Our research is telling us that 40 per cent of consumers are looking for salad inspiration – they love their leaves, but are looking for fresh and tasty new flavour ideas so they can enjoy their salad even more.”

Meanwhile, Florette this week reported a season-first spike in sales of 45 per cent year on year after ‘switching on’ additional bursts of its Bags of Feelgood TV advert in the run up to the bank holiday weekend.

The brand’s summer advertising campaign, which features primetime TV slots, operates according to ‘sunshine-planning’ criteria so that it can be weighted in line with sunshine levels.