The Prata, or silver, banana is one of the most talked-about new varieties to have emerged in the fruit industry. FPJ visited Brazil to find out why Cavendish might finally have a serious rival 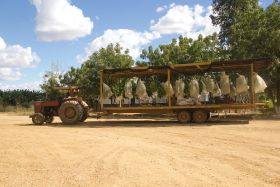 Over in Brazil, a quiet revolution has been taking place in the banana category. The total market dominance of Cavendish, the global standard variety, has been steadily eroded over the last decade by the Prata – or silver – banana, whose unique traits are gaining it popularity with suppliers and consumers alike.

At Dosanko Farm in Brazil’s Jaíba region, in the state of major Prata-producing region Minas Gerais, Jun Yamada is busy inspecting his latest crop. His company, Brasnica, is one of the largest Prata growers in the country, and he became so convinced of its qualities that he switched the entire production over from Cavendish.

“Prata has gained the market share it has because of the quality of the fruit,” he explains. “You only need to spray twice a year because the susceptibility to pest and disease is lower. It also tastes good, and it’s healthy.”

Others have offered up further reasons for making the switch. Gustavo Wagner, another grower in the region, says he changed over as high winds were meaning he was having to artificially support the Cavendish tree from blowing over, while disease was affecting the roots. Prata trees proved both more hardy and disease-resistant.

Perhaps the characteristic that is gaining Prata the most interest is its durability once cut. The product takes around three times longer to brown than Cavendish, giving it real potential in the fresh-cut market as well as fresh.

Brazilian horticultural body Abanorte has been doing its own research comparing Prata with the standard variety, and has made some notable discoveries. In particular, while Cavendish took some 30-40 hours to brown after cutting, Prata retains its natural yellow colour for 96 hours. The implications from a waste perspective if consumers see a product that can last for days longer is huge. It’s not all good news, however; shelf life is not yet as good as Cavendish and the product does not always have the same perfect yellow skin, something that could prove a challenge with the image-conscious European consumer.

Trials are currently underway to test the product’s durability in shipping, with improvements in cooling technology set to open up the European market in the near future.

Certainly once the technology is in place the message from Brazil is that the country is ready to begin commercial exports in earnest. Frutvale, a co-operative of 20 growers which sells around 500,000 20kg boxes of mainly Prata bananas every year, says it is ready to seek out markets abroad and believes the fruit will find success. It has already begun selling to Portugal and has also sent trial quantities to the UK as part of fruit salads.

“We have great expectations for Prata,” says commercial director Vicente de Paula, though he admits consumers may have to adjust their mindset and be educated that markings on the skin do not mean a poor-quality fruit. “The challenge with Prata is that it might have more brown markings on the skin and consumers can be fussy.”

The processing market seems like a natural home for the fruit, and Frutvale has been doing some innovative work in coming up with new lines and ways of presenting the product, including banana candy and banana chips.

De Paula believes these can be the perfect healthy snack for children’s lunchboxes, and there are also several projects in the pipeline to manufacture banana sweets.

Brazil is in a unique position in that it is the only country that has serious commercial volumes of Prata available, making it unsurprising that authorities are so keen to put the product on the world map. It still faces its challenges in terms of shipping and winning over a sceptical consumer demanding visual perfection, but if the many benefits of the fruit can be explained then the landscape of the banana market could be about to see a very significant change.