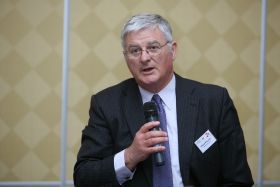 Tributes have been paid to industry veteran David Piccaver, who has passed away after a short illness.

The JE Piccaver and Co. chairman died on 13 December, and was buried this morning in Lincolnshire.

As well as chairing and working for the specialist lettuce, salad onions and herbs producer, Piccaver was also a director at horticulture industry labour supplier Concordia, and undertook a range of overseas and UK-based voluntary work.

A statement released by JE Piccaver and Co., said: "David will be greatly missed by us all, and was well respected within the farming community."

He was also a research foundation director at Stockbridge Technology Centre (STC), and Graham Ward, of the centre, said: "David was a personal friend of many staff and directors of STC. His contribution and devotion to our industry was immense. Our sympathies must be with his family at this time."

Piccaver had also been a board member of the former British Potato Council levy board, a director of potato prepacker QV foods, and had chaired Lingarden - a company marketing bulbs, flowers and onions - for 27 years as it grew into a £75 million business.

Earlier this year, he was appointed to the Agriculture and Horticulture Development Board (AHDB), where he assumed the additional responsibility of being Sector Chair (Potato Council).