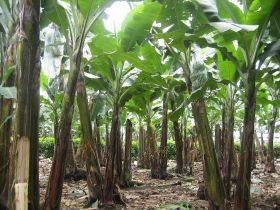 Banana trees aren't a common sight in the UK

Bristol port might see plenty of bananas passing through its doors, but suggesting that they grow in the British city is a one-way ticket to being labelled 'bananas'.

The Western Daily Press reports on Sam Scott, a retired chef from the St Paul's area of the city whose banana tree is finally bearing fruit.

The news outlet reports that it has taken Scott four years to reach this stage, aided by the fact that the UK has had a mild winter.

He told the Western Daily Press: "I was as surprised as anyone to see the fruit – the frost is usually what kills it."

The 72-year-old has been a keen gardener since he arrived in Bristol from Jamaica 56 years ago.

He has tried growing a variety of exotic fruits in his time in England, such as yams and coconuts, but until now nothing has survived the UK's cold winters.

But, Scott is now looking forward to harvesting his first crop of bananas – currently small and green, the Western Daily Press reports, and growing as part of a small bunch of eight on the tree.