Hard-hitting TV ad steps up slavery fight in the UK

The national campaign, which will run in the UK until October, aims to encourage the public to identify signs of modern slavery 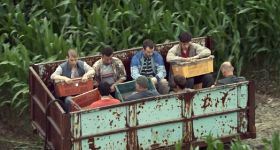 A still from the advert

A hard-hitting television advert focusing on the human cost of slavery is currently screening on prime UK channels as part of a major new Home Office campaign to raise awareness of modern slavery in the UK.

The national campaign, which will run in the UK until October, is the first of its kind in this country, and aims to encourage the public to identify the signs of modern slavery and report it by calling a new national helpline.

The three scenes at first appear to show snapshots of life in distant or unfamiliar places, before the advert reveals that these examples of slavery are taking place in a recognisably British setting. The advert concludes with the caption: ‘Slavery is closer than you think’.

Home secretary Theresa May, said: "It is difficult to accept that modern Britain is home to slavery, but this appalling crime is taking place here – often out of sight – in shops, fields, building sites and behind the curtains of houses on ordinary streets.

"The first step to stamping out modern slavery is acknowledging and confronting its existence. This campaign aims to bring this hidden crime out into the open and challenges us all to report it wherever we suspect it."

The national helpline, which is supported by the NSPCC, offers information and advice to child and adult victims of slavery, as well as to professionals and members of the public.

At the same time, a dedicated website will help educate the public about how to spot the signs of modern slavery, report cases and where to refer suspected victims.

The national campaign is the latest step by the government to tackle the crime of modern slavery.

In June, the Modern Slavery Bill, the first of its kind in Europe, was published. It aims to give law enforcement the tools to stamp out the crime and increase support and protection for victims. The bill is now being scrutinised by parliament with the intention that it is made law before the General Election next year.

You can view the advert by clicking here.