Solveiga Pakstaite, 22, has developed a label that changes texture as the food inside the packet goes off 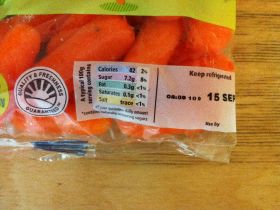 Could use-by dates become a thing of the past?

An inventor not long out of her teens has come up with an idea that could spell the end of use-by dates on food.

Solveiga Pakstaite, 22, has developed a label that changes texture as the food inside the packet goes off.

The sticker, which contains gelatine, starts off smooth but over time develops bumps as the gelatine decays.

Pakstaite, from Stevenage, Hertfordshire, said: "I wanted to create a label that would change its texture over time to model the decay process of food and drink.

"Why gelatine? Because it is a protein, so it decays at the same rate as protein-based foods like pork, milk and cheese. And the gelatine can be adapted to match the expiry period of the food by altering the concentration.

"So, the higher the concentration, the longer the gel will stay solid. The label simply copies what the food in the package is doing, so the expiry information is going to be far more accurate than a printed date."

The design and technology graduate, whose parents are computer scientists, according to Mail Online, has applied for a patent for her idea, and is talking to several firms about developing it commercially.

If it is taken up, it could help to solve the vast waste problem created by inaccurate use-by dates. Seven million tonnes of food are thrown away every year in Britain, costing around £480 per family.

Her invention saw her crowned the British winner of the James Dyson Award for product design, winning £2,000 in prize money. She will now be entered into Dyson’s international contest.