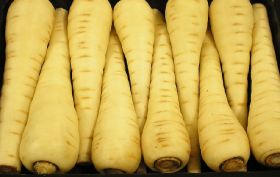 Baby parsnip brand Piccolo has launched a new recipe series as a marketing push at the start of the season.

Television chef Rachel Green has created recipes for the brand including curried Piccolo and sweet potato soup with coconut, and roasted Piccolo with pear and beetroot salad.

Available from September to March, Piccolo parsnips are produced by Chantenay carrot-grower Freshgro.

They are currently stocked by Sainsbury’s in its Heritage range as well as Morrisons and Waitrose.