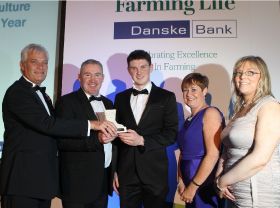 Mushroom producer Sean Murphy, of Bridge Mushrooms, has been named Arable and Horticulture Farmer of the Year at the 2014 Dankse Bank Farming Life Awards.

Murphy, who produces mushrooms for Northway Mushrooms, received the award at the end of last month at an ceremony in Belfast.

It was awarded for commitment to innovation, diversification and efficiency practices. Bridge Mushrooms has invested £1 million over the past five years to expand the business.

Out of 200 entries from the Ulster region, 24 finalists were selected and judged on financial performance, company milestones and achievements, future strategy and development of innovative products.

24-year-old McKenna started his mushroom business when he was 18 along with his father, and has grown from producing 3,500 kgs a week to 30,000 kgs a week, and employing 41 staff.

Last year the company doubled production and invested over £1 million, with further expansion planned next year.