Public ‘must be won over’ to GM, say politicians

Labour, the Tories and the Lib Dems all spoke in favour of GM at NFU conference, but warn public must now be persuaded 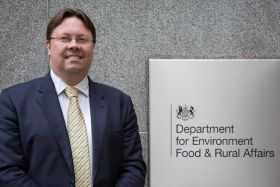 Dan Rogerson: We must win over the public

The public must be “won over” to allow the debate on GM foods to move forward and ensure UK agriculture can compete globally, leading politicians have said.

Ministers for Labour, the Conservatives and the Liberal Democrats all publically outlined their support for GM technology at this year’s NFU conference, held in Birmingham this week, but said there is work to be done to sway public opinion.

During the debate Humphreys asked: “Is it inevitable that, to achieve high-tech disease prevention, we will have to embrace GM?”

Irranca Davies replied: “Yes. GM has to be a part of it. But it is also about the simpler crop sciences, as well as the high-tech R&D.”

Eustice said that, providing there is an evidence-based approach to GM and there is no risk to the environment, the UK “should be growing GM crops”.

Speaking in a press conference after the main debate, Rogerson said the Lib Dems are “comfortable” with the evidence-based approach to GM, which he said has led to EU member states now having the power to individually ban or approve a GM product, following a wider approval at EU level.

But he added: “The public has to be won round. It’s not simple or easy, but we have the evidence base to help us do that. More control at a national level is what we need to do.”

Eustice described the vote to give nation states power to approve or ban GM products as a “breakthrough”. “It’s not an easy debate, but we have to persevere and consistently argue for a science-led decision," he said.

But Llwyd stated that the Plaid Cymru party is not in favour of GM. “We are not happy with the GMO scene at the moment. There is a huge amount of distrust out there, and the public is not necessarily going to believe the scientific evidence,” he warned.