Firm set up to try and create 'safer' fruit and veg

Swansea-based Bionema has been created to produce biopesticides like certain types of fungi, bacteria, worms and viruses 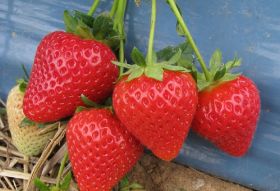 A high-tech company has been set up in an attempt to give consumers safer fruit and veg at the supermarket without harming the environment.

Swansea-based Bionema has been created to produce biopesticides like certain types of fungi, bacteria, worms and viruses, which kill off pests without leaving harmful residues behind, news outlet Wales Online reports.

The global biopesticide and synthetic pesticide market will grow from £34 billion in 2013 to £53bn by 2019, according to research firm BCC. And now Bionema has just received accreditation from the watchdog group the Official Recognition of Efficacy Testing Facilities or Organisations (ORETO) scheme for efficacy in testing which means the spin out firm now has a major advantage in what is a rapidly emerging market – opening up new international business opportunities.

The company was established with support from the Research, Engagement & Innovation Services team at Swansea University and its innovative biopesticides are aimed firmly at the agricultural/horticultural market.

One example of a Bionema product is a biopesticide developed to control a determined pest of the strawberry, known as the Western flower thrips (Frankliniella occidentalis). This causes an estimated £15m worth of damage to the crop per annum in the UK alone.

It has been documented to feed on over 500 different species of host plants, including a large number of fruit, vegetable, and ornamental crops. Despite its deadly effect on crops, the adult male is only 1mm long, the female being slightly larger, about 1.4mm in length.

Dr Gerry Ronan, head of commercial services at Swansea University, told Wales Online: “It’s very encouraging to see the progress Bionema has made in such a short space of time.”

Dr Minshad Ansari, founder and managing director of Bionema, which operates out of the Institute of Life Sciences at the Swansea University campus, said: “EU legislation and consumer-led demand means growers have to reduce the use of chemical pesticides in crop production to grow fruits and vegetables with reduced detectable residues.

“This accreditation gives us the opportunity to become a UK leader in this important new way of controlling the increasing number of insect pests in the UK.”