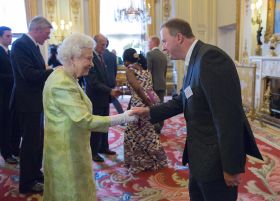 Veldsman meeting the Queen, while Cudjoe meets Prince Philip in the background

Africa-based representatives of a pioneering fresh produce firm met the Queen at a reception for Queen's Award winners at Buckingham Palace.

Blue Skies, which has factories in Ghana, Egypt, South Africa and Brazil, cuts its products - which are sent to UK supermarkets - at source, employing thousands of local people in the process. The award is in recognition of this approach.

The firm was also officially presented with the award by Her Majesty’s Lord Lieutenant for Northamptonshire, David Laing, at a champagne reception held at the company’s headquarters at Spring Hill Farm in Pitsford today (21 August).

During the reception staff from Ghana and South Africa spoke to guests about the company’s products and the impact the business has on local communities.

Blue Skies has been producing fresh-cut fruit and freshly squeezed juice products since the late 1990s.