Fast food giant commits to only sourcing British potatoes, to help growers 'innovate and invest for the future' 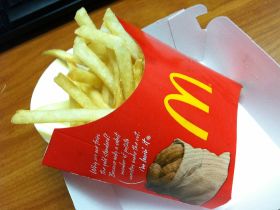 McDonald’s is reportedly set to start only sourcing potatoes from British farmers.

The move comes as part of a shift in strategy, as the fast food giant looks to appeal to customers more conscious about where their meals come from.

While most of its potatoes are already supplied from the UK, McDonald’s currently sources 13 per cent of its spuds from countries across Europe, including Germany.

But according to the Daily Telegraph, this latest shift in potato sourcing - effective immediately - will potentially mean an extra £9 million for British farmers, on top of the £70m McDonald’s spends with them each year.

McDonald’s is one of the largest buyers of British potatoes, and the company expects to buy a quarter of a million tonnes of potatoes this year.

The group also sources all its pork, eggs and milk from British farmers.

Connor McVeigh, ‎supply chain director at McDonald’s UK, told the Telegraph: “A succession of wet harvests has caused the British potato sector great uncertainty in recent years, so I hope our long-term commitment to only source from this country will give farmers the confidence to innovate and invest for the future."

The latest move on potatoes also comes as part of a wider £350m investment programme in the UK, as McDonald's works to overhauls its 1,250 stores in the country, and transform its menu offerings.

McDonald’s is introducing new wrap options this month in a bid to take on the rising number of food companies competing for the lucrative lunchtime market.

Despite reporting lower sales in the US, McDonald’s has posted 37 consecutive quarters of growth in the UK, and plans to open up to 30 new outlets a year this decade.